How was your first week of 2012? Mine rocked. So many folks are back to smoking cigarettes, or eating meat, or drinking much too much alcohol again, and by that I mean so many folks have failed miserably at keeping their resolutions, already. But others are still super committed to my resolution. Even one step closer to realizing it. It’s becoming a movement, really, and not just for Gomez and me. For so many, it’s a realiz-ution more than a resolution. If you are one of those folks who were drunk, or in a food coma, or blinded by a cloud of ciggy smoke on New Year’s Eve, making resolutions you immediately regretted even before you got started, I offer up my resolution for you to work toward. Take a look and join the growing number of people who are committing themselves to it in 2012. 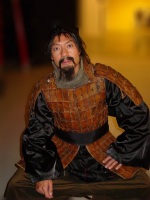 Vince Canlas is one of those people. He jumped aboard this bicycle built for way-more-than-two we love to call The Gilda Sue Rosenstern Computer Internet Show and we couldn’t be happier to have him.

Thanks, Vince! Team Gilda Sue is stronger, and Oprah Winfrey weaker, with you among the ranks. You rock.

And, y’all, thanks in advance for all your help in 2012. We’re going to need it. Rea-real. Give all the good ju-ju, cash, and well-wishes you can. Start by clicking HERE! Then please spread the word!

The Deep South's gabbiest half Jewish talk show hostess on a never-ending quest for fame, cosmic truth, the mensch of her dreams, and a "real-real rockin'" cocktail! View all posts by gildasuerosenstern