Those of y’all who don’t do the blogging thing may not know that there’s a way we bloggers can see which posts get a lot of visits, and what part of the world readers are visiting from.

Studying those statistics have led me to understand that folks in the British Isles LOVE vagazzling. Or are real-real fixated on it. Or are super-terrified of it? I don’t know, but 90% of the meshuggners who click onto my 2010 post about this very topic (http://gildasuerosenstern.com/2010/09/10/vajazzle-vajangle-or-vagetaboutit/) are from the British Isles.

What’s that about? If you are Irish or British (and if you’ve found this blog entry, I feel pretty certain that you are) please let me know what’s going on over there? Are you all vagazzlers? Wanna-be vagazzlers? What gives? Leave your comment here and enlighten me!

Best five to seven minutes of you holiday, right there!

What? What I mean is–

Y’all, we at Mean Mama Dog Productions are super-duper excited to announce a new fundraising campaign for the movie about my life! I KNOW!

As some of you may know, we began filming the movie about my life last fall, but we ran out of American dollars. Now, we don’t really need tons of money to make this movie about my life, but we do need some. There aren’t any car chases, explosions, sword fights, or extra-terrrestrials– wait. Hold on, There may actually be an extra-terrestrial or two. I mean, maybe not. At present, we aren’t real-real sure what in the world those folks actually are. It remains to be seen.

If you want to find out what in the world those folks actually are, give us some of your hard-earned cash so we can make the darn movie and show everyone, including you what those darn folks actually are. Maybe.

Here’s my point: go to our Indiegogo page. Check out all the cool “perks” we offer contributors. And, most important, PLEASE PASS IT ON! Use that little Facebook icon to share it. Tweet it. E-mail it to all your coolest friends, you know, the ones who like super-cute independent film.

Thanks a ton, y’all!

Y’all, Mira Hirsch just totally rocks the ever-lovin’ casbah. So charming. So Jewish. I mean, she’s completely Jewish, not just half. And she rocks that Jewishness like no other full Jewess I know! (Except for Granny Rosenstern, of course.)

The bad news here is that my camera crew only got half the interview. The good news is that it’s Mira’s half.

Note: Never pay your crew in Drambuie shooters. Or at least wait until the shoot is wrapped before delivering payment. Oy! 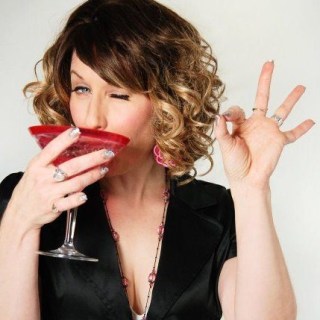 A reminder from The Bleu Stockings: Before you despair, read GILDA SUE’S MAIL BAG, y’all.

What about that, y’all? The world has come to an end!

At least mine has. And by that I mean my new world has begun!

Not like a “new world order” or anything. In fact, there’s nothing super orderly about it. If you want to know the truth, it was really and truly born of complete chaos.

Folks, don’t knock chaos. Chaos gets a bad rap. But truth to tell, some chaos — like the chaos of losing “control” and telling everyone and everything around you what’s what (just as an example) — (A) is just as much fun as it sounds, (B) actually makes you feel more in control than out, and (C) is a super good idea. You’ll know what I mean if you just give it a try. Go ahead.

Now, these “episodes” (as Gomez calls them) may feel just the teensiest bit like lunacy while you’re in the middle of them (which is also just as much fun as it sounds), but it’s the aftermath that’s important, and the aftermath can sometimes totally rock. In the aftermath you may see that you’ve weeded out all the drek that was holding you back, and that you’ve been catapulted into a whole new (and sometimes) better place.

Of course in the aftermath you may also see that you’re in the unemployment line, or that your Daddy has cut you off, or that you’ve lost your best pal and/or a bottle of Drambuie careening down a dirt road somewhere on the outskirts of town in your old prom dress, a completely ruined mani-pedi, and a stolen Oldsmobile piloted by that has-been high school quarter back What’s-His-Name Spingler the night of your class reunion. But chances are that even these things are really just little blessings in disguise. Don’t ask for details, folks. Just trust me.

The point is that here I am in the aftermath, and the movie about my life is in full swing! I KNOW! It’s so exciting!

Y’all, we still need tons of help, by the way, and by “tons of help” I mean whatever you’ve got, we’ll take it, so spread the word!

Thanks a ton, and Happy End of the World!

No, I have no idea what that means, or who Zambi is. But I do know who Frank Zappa is. Well, sort of. And he, apparently, loved Bruce Hampton, also known as The Master of Mayhem. At least that was what Bruce always told me. But that was years ago when I used to be a rock n’ roll groupie. (I’d say “more about that later” but there will be no more about that later. Oy!) The Colonel is what someone once called a “surrealist musician.” I have no idea what that means either, but he’s a total legend in the music world, and he’s been in movies, too. Even one with Billy Bob Thornton!

Anyway, y’all, here’s what I’m getting at: The Colonel, the OUTkeeper of the asylum, the Duke of the OUTsane, the OUTerpreter of OUTension is going to be in the movie about my life. I KNOW! It rocks! It’s OUTcredible! (This is all Bruce-speak, lovelies. Well, sort of. I may be OUTventing some words, adding to the dictionary I learned during my few years of regular social OUTercourse with the doctor of OUTernal medicine. But, you get it, right?) We at Mean Mama Dog are real-real excited, and you should be, too.

So much fun news to share! Stay tuned for more! And, Brato Ganibe, y’all!

I’m just tickled pink to announce the addition of English Mark Ashworth to Team Gilda Sue. That’s what I said, y’all. ENGLISH! Like British. Only not so much. I KNOW! British folks in the movie about my life! That rocks!

Y’all, check this out! Gilda Sue Fandom! Thanks to AliasQTip I have my own comic strip dialogue balloon, and bright yellow narration bar, and everything! I don’t know if you’re a rapper, a fanboy, or a smartie-panties, Mr. Tip. But you rock! 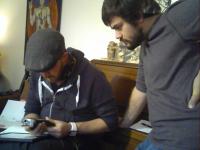 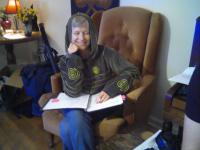 We really just got started, but it’s already become painfully clear, that if anything goes wrong, it’s totally Cayce’s fault.

Stay tuned for news of all things Mean Mama Dog. This is gonna be real-real fun!